Some people hink that Linux is some sort of mysterious and super complicated operating system because all they've ever known is Windows.  Unlike Windows, there are lots (hundreds?) of varieties (called distributions, or distros) of Linux for all kinds of purposes. The two that I'll focus on here, Linux Mint and Ubuntu, are for computer users coming from Windows, and want to get away from Windows for any number of reasons. I can understand that.

Let's look at the Mint 20.3 (Cinnamon) desktop. This is one of the three desktops that Mint uses.  Here is a screenshot. 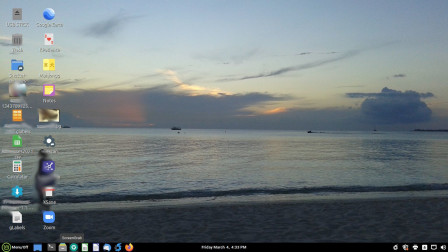 This is much the way your desktop looks after you install it. The taskbar, or panel as it's called in Linux, is on the bottom. Instead of the Windows logo as the first icon on the panel, you have the Green Mint logo. Click on it to turn the computer on and off and get a menu of all installed programs, and there are many.  Your programs are on the left side of the panel and your system items (time, update manager, network, etc) are on the right side just as they are in Windows. The only major difference in this panel is that I took the date and time, customized it and put it in the center. I like it better that way. 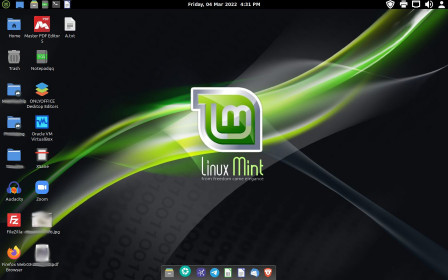 The bottom panel (taskbar) is now on the top.  The thing on the bottom is called a dock. This dock is called Plank. You can put your programs in it and launch them with one click. The word for the Cinnamon desktop is "customizable". You can change anything or everything. It's your choice.

Now let's look at Ubuntu. Personally I think Mint is easier to use that Ubuntu, but lots of Windows refugees like it anyway. There are some things I just don't care for in Ubuntu and the desktop is probably the item I like least. I want something more Windows-like, so instead of using the stock Ubuntu desktop, I installed the Ubuntu budgie desktop. This is it below...

Now, Ubuntu with the Budgie desktop is more to my liking. The panel (taskbar) comes stuck to the top but can be moved. The panel at the top is hard to see because it's white. The menu is accessed through an icon on the top left.  The system stuff is on the top right and your shutdown button is way at the right. I put the date/time in the center. Also the Budgie desktop comes with the dock on the bottom. I much prefer this over the standard Ubuntu desktop. This desktop is not quite as configurable as the Mint Cinnamon desktop but you can do lots with it, unlike standard Ubuntu.

And finally, here is the Ubuntu Budgie desktop. This one is standard Budgie. You have your choice of six or seven others. 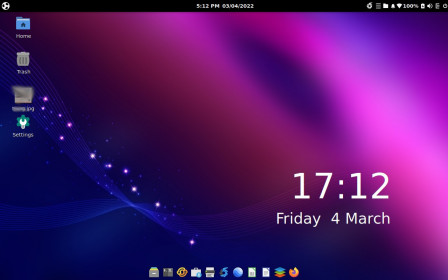 In this picture, it's easier to see the Budgie menu icon at the top left side of the panel.  Ubuntu doesn't come with as much software loaded as Mint Cinnamon does, but if you need something that is not in their software repository (the suitcase with the blue arrow on the dock), you'll need to find it in a private repository.

If you were wanting to ditch Windows and asked me which OS I prefer, Mint or Ubuntu, I'd say Mint.

Most of your desktop settings in Mint can be accessed by right-clicking anywhere on the desktop, but not so much with Ubuntu. It took me a while to find settings in Ubuntu which were easily found with Mint.